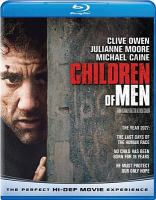 Excellent movie with many relevant aspects!

Harrowing, all-too-recognizable vision of the near future. Extraordinary direction by Alfonso Cuarón. Clive Owen is superb as the reluctant hero.

This was a bleak depiction of the future injected with an undercurrent of hope. I quite enjoyed the performances and the long, steady shots of the action. Very brutal but very decent film.

i enjoyed the acting turn from Michael Caine. Is the novel by P.D. James the best she's done? WHAT YOU GOT, a song from 1974's WALLS AND BRIDGES, covers the same existential dilemma.

Humanity's renewal, our only innocence and source of Hope for the future...is lost.
As the voice of youth wanes in memory, so does its influence as a binding commonality that all peoples shared in protecting.
But could a lone babe's cry even be heard.... through the chaos of its long-since absence?
"Children of Men" is explicit in its portrayal of a dystopian nightmare, captivating in its details......yet so very touching.... in its sensitivity.

It is one of the few movies that I have seen that has really stuck in my head and I think back to it years later when I see current environmental or global immigration issues talked about in the news.

As an earlier critic mentioned, the sound effects in the movie really made this film notable. I originally saw this movie in a theater, which of course has a great sound system. The movie is still great on a home entertainment system.

This is a much different type of dystopian/post-apocalyptic movie that one typically sees from the movie industry. This is a movie that is reflecting on humanity/society in the future and is not an action zombie and gore type of end of the world movie. If you are someone that loves Handmaids Tale or Orwell's 1984, then this is a film for you.

Timeless gem. If God wanted to judge this world, He could shut up the wombs of every woman on this planet and within 100 years we would be extinct. Without any plagues, war, famine, but just that. In the movie "Children of Men", it appears He did just that and it's now 20 years in after this judgment. The music and atmosphere was so dense it was like a character in itself.

Watched this when it was in cinemas back in 2006, and it was a time that you really had nice creative movies come out before the proliferation of franchise movies. I've re-watched this again and noticed there is a dry-humour in the script that, when you get it, it really cracks you up. The funniest line was if the first baby born ends up from a Black woman, if they would replace it with a White woman, and I thought it was insanely funny this movie actually went there.

The social commentary in this movie is time-less and you could even see the attitude that the U.S. administration has towards Mexican/Central Americal illegal migrants, and then watch a movie of how they are bombing migrant ghettos by the ending and see that this movie has not aged at all, even 13 years after its release date.

-5 Stars...
The B.$. (narration/'news' V.O.) spouted out in the first 30 seconds of the film, is an exact 180º of reality (i.e. truth). That should give everyone a big giant red flag right there, and the egregious level of this warped fantasy to actual facts, makes even CNN look like bastions of truth. LOL! That's the platform this entire story is built on.
Unbridled, unabashed, blatant left wing/world govt/communist (which ever label you prefer) propaganda.

Interesting film about a bleak future.

Miriam: As the sound of the playgrounds faded, the despair set in. Very odd, what happens in a world without children's voices.

Theodore Faron: Julian? I haven't seen you in twenty years. You look good. The picture the police have of you doesn't do you justice.
Julian Taylor: What do the police know about justice?

Theodore Faron: Who's the father?
Kee: Whiffet! I'm a virgin. Nah! Be great, though, wouldn't it? F**k knows. I don't know half the wankers' names.

Miriam: As the sound of the playgrounds faded, the despair set in. Very odd, what happens in a world without children's voices.

bdls206 thinks this title is suitable for 17 years and over

In 2027, in a chaotic world in which humans can no longer procreate, a former activist agrees to help transport a miraculously pregnant woman to a sanctuary at sea, where her child's birth may help scientists save the future of humankind.

Find it at HPL